It was a tasty month, starting with strawberries (jam and shortcake) and ending with blueberries (jam). I had enjoyed Nomad’s soppressata pizza with a drizzle of honey, so I did the same with this Trader Joe’s uncured pepperoni pizza. Until now I didn’t even like pepperoni, because it was neon orange, harsh, and so greasy. But the higher-quality uncured kind isn’t bad!

I had fun experimenting with the excellent Hoboken Farms tomato sauces (seen below with sausage and peppers on a torpedo roll), and Finlandia butter (butterscotch-pecan scone).

I made clam chowder and that was a real success thanks to McCaffrey’s fresh chopped clams. So were the lamb ribs with fried green tomatoes. I have FreshDirect to thank for those ingredients, along with their chicken cannelloni with creamed spinach and chicken tortilla soup.

Scored some Max Hansen smoked salmon at Lucy’s for a bagel lunch, and also a container of Lucy’s clam sauce and fresh linguine. And a ciabatta full of holes. (I didn’t care, they sell great breads.)

I made Greek barley salad and marinated string beans with tomatoes, and dined out on a seafood burger at Blue Bottle Cafe, lobster Benedict at Turning Point in Mercer Mall, and whole pomfret (such a cute little fish) at Spice Rack in Franklin Park. The cardamom rice pudding (with strawberry jam and whipped cream) was a way to use up leftover rice from there. I might make my next rice pudding with the chai spices I got from the Savory Spice Shop in town, along with several other blends. 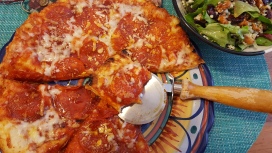 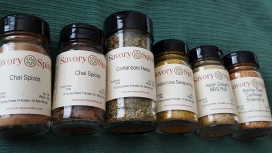 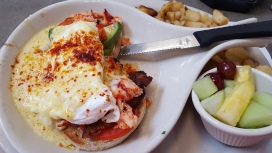 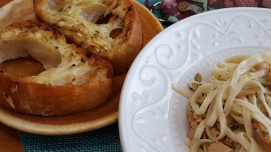 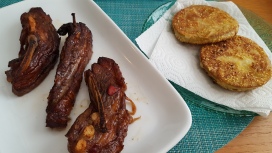 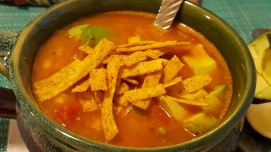