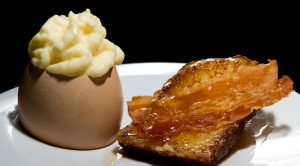 Elements  chef Scott Anderson has been named a semifinalist for Best Chef Mid-Atlantic in the James Beard Foundation Awards. The finalist are to be named on March 18, and I have great hopes of seeing Scott’s name on that list. too.  The awards are announced in New York on May 6.

He, his chefs, and his gracious staff have truly raised the bar for fine dining in our area, and we owe him a debt of gratitude for that.  Check out their current menu, which is a mix of a la carte items and prix fixe tasting menus, and make a point of going soon. (You’ll also be able to preview a few of the small plates from their new place uptown, Mistral, slated to open in
March.)

The photo here, from the restaurant’s website, is one of my favorite things I’ve had there, at brunch one Sunday. It’s all there, bacon, eggs, brioche french toast, maple foam, each element of the dish stood out and was delicious. That’s what it’s all about folks!