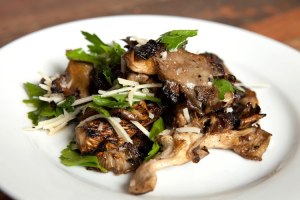 Chef Will Mooney, who owns Brothers Moon in Hopewell along with his wife, Beth Ann Judge (check out her gorgeous new jewelry store!), was one of the area’s first chefs to embrace local products. He’s long worked with farmers and other producers to further the locavore movement, and that is what makes a visit to Brothers Moon so special.

I have often written about Will, and used his recipes in my writing, but I had not been to the restaurant in a while, so when he invited me to attend one of his Wednesday Mushroom Love dinners as his guest, I jumped at the chance, and brought along my mushroom-loving friend, Carolyn Edelmann.

The photos you see here are from that delicious dinner, which also included a chat with Alan Kaufman, whose Shibumi Farm mushroom-growing operation has become a favorite source of exotic mushrooms for select chefs. His career path took him through microbiology, hedge fund management, and restaurant ownership (logical, right?). He got into the mushroom game thanks to acclaimed chef Daniel Boulud, who challenged him to come up with a classic French mushroom to rival the ones he had flown in from across the pond every week.  Well, one thing led to another, and before you know it, Kaufman has become a respected grower and purveyor of beautiful and delicious exotic mushrooms to top chefs up and down the mid-Atlantic states.

Carolyn and I  both started with “Shittake on a Shingle” (wink, wink), creamed shiitakes on toasted brioche, and showered with microgreens. 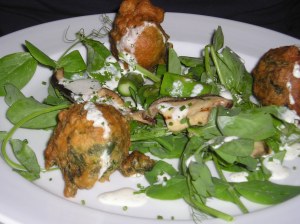 We split up on the second course, Carolyn going for Grilled King oyster mushroom and asparagus with ramp fritters and pea tops, mint cucumber crème. (n.b. ramps and asparagus are both in the same order, asparagales). I had roasted lemon oyster mushrooms, red onion, local mesclun with shallot, sherry, honey vinaigrette and “shroomed” deviled egg. The mushroom (truffle?) scented eggs were a bit of heaven for sure! And the lemon oysters were a little crisp around the edges, really nice.

My entrée of seared NJ (of course!) scallops came with a grilled Lion’s mane mushroom sandwich and vegetable slaw, while Carolyn’s filet mignon was topped with a ragu of pioppino mushrooms, gratin Dauphinoise, and lovely grilled asparagus.Dessert? Mais oui!  Chocolate cake with Shiitake ganache and crème Anglaise. That mushroom flavor didn’t show at first, but after a couple of bites it was like an echo, a hint, a half-heard whisper.  Heavenly!

(Photos, except for the first one, by Faith Bahadurian.)