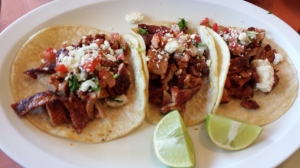 Tacos are trendy, so I’m reprising a 2009 In The Kitchen column in the Princeton Packet, which I’ve lightly updated. The article offers a little history along with a menu comprised of a nice green salsa of avocados and tomatillos, one of my favorite tacos, and a chocolate flan for dessert. Invite your friends over and go to it – and remember the margaritas!

Cinco de Mayo is maybe even more enthusiastically celebrated by Mexican descendants in the United States than in their homeland, as a way of keeping old traditions alive.

The day is often erroneously referred to as Mexican Independence Day, although Mexico had declared its independence years before, on September 16, 1810.  Cinco de Mayo celebrates the May 5, 1862 victory of the Mexican Army against French forces at the battle of Puebla.  Sadly, that victory was short lived; within days the French forces had rallied and Puebla was captured, opening the way to Mexico City, and the defeat of Mexican President Benito Juarez.  With the help of the Mexican Conservative party, Louis Napoleon imposed Maximilian of Hapsburg as Mexico’s emperor in 1864.  But on June 5, 1867, Juarez entered Mexico City where he installed a legitimate government and reorganized his administration.

This was the triumph of the Mexican Republic, and today, on Cinco de Mayo, restaurants all over, but especially in Puebla and Mexico City, offer that flower of Mexican cuisine, mole Poblano.  I have written about this complex dish before, so I do not include it here, but it’s on the menu at A Taste of Mexico, the little place in the Princeton Shopping Center, with a second location uptown behind Cox’s Market.

The recipes below are a sprinkling of dishes from all over, not necessarily holiday fare, but the making of a casual fiesta of your own.  I used to buy Wholly Guacamole’s Guaca Salsa at Wegmans, and Trader Joe’s briefly had an excellent version when they first opened here that I still crave. But there’s an easy recipe for it below from  “Celebración, Recipes & Traditions Celebrating Latino Family Life,” written for the National Council of LaRaza, the Latino advocacy group. (The recipe makes a lot, so feel free to downsize.)

When I plan a Mexican menu, I have a preference for the more casual dishes, but then when it’s time for dessert, I’m in the mood for something a little more elegant.  The modern take on flan below, really dresses up a meal, Mexican or otherwise. Of course, you could also seek out some chocolate-chili ice cream! (The Bent Spoon, maybe, or Mrs. Green’s.)

Note: This will make enough for 16 tacos or tostados (flat tacos).  The chiles called for here are dried, not too spicy, and available in many supermarkets, Mexican grocers, or try Savory Spice Shop. You can heat the tortillas in the oven, wrapped in foil, but I prefer to blister them on a skillet or the stove top grill shown in this recent post. F.B.

1 cup chopped pineapple (fresh or canned, but not in syrup)

2 pounds pork, boneless chops, or shoulder if you like it fattier

Cut the pork meat in thin steaks or slices and set aside.

1 tablespoon Kahlúa or other coffee liqueur