This all started because I had some pricey “European Style” sour cream from the Whole Earth Center to use up. It was just too good to waste. So I googled, and found a recipe on food52.com for Sour Cream Cardamom Pear Cake.

As I started making the recipe, I noticed my butter and sugar were not creaming properly, and quickly realized it was because most of the sugar I have on hand now is “natural” raw sugar, so the crystals are quite not as fine. A quick check online confirmed my suspicions. Based on what I learned, I added 2 teaspoons of water to the mixer and that did seem to bring the butter and sugar together.

I didn’t have pears, but I had a bag of frozen cherries beckoning in the freezer. I thought those would go well with cardamom (my favorite spice lately), so scattered about 12 ounces on top of the batter. I also added a teaspoon of vanilla to the batter, just because. Maybe with cherries I should’ve tried almond extract instead? But I think that might have distracted from the cardamom.

Those berries were so much juicier than pears that the cake took a good hour and a quarter to bake rather than the suggested 40 to 50 minutes. I could see how jiggly the cake was in the middle, so kept it in the oven until a toothpick came out clean. For the last 15 minutes, I set a piece of foil over the top (lightly, not pressed around the pan) to keep the cake from over-browning.

The cake was delicious, especially with a dollop of some Double Devon Cream I also had in the fridge. 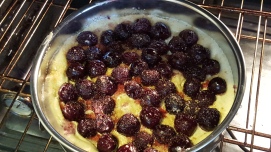 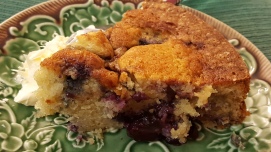