When stone fruits ripen, I go a little crazy with the baking. Last summer I fell hard for the galette, an easy alternative to pie. With a galette, you just lay out your pastry on a baking sheet (home made pie crust, purchased dough, puff pastry, whatever you like), and pile the fruit in the middle with some kind of dry mix with sweetener, spice, and a thickener for the juices. And you usually dot it with butter. Then you turn up the edges, pleating them around the circumference, and bake it. What you get is a very rustic kind of tart that you cut in wedges to serve. Maybe with some crème fraîche, whipped cream, or ice cream.

Last year I was hooked on a Peach & Pistachio Galette with coffee grounds from pbs.org, and included it in a recipe column. This year, I’m thinking about almond flour, thanks to Jacques Pépin’s recipe for this plum galette. But I’d also spotted a gorgeously colorful apricot and raspberry version online too. (Now it could be peach and blueberries! Or peach and blackberries! Plums are on the horizon, too!) So I used M. Pépin’s almond/flour mixture with organic apricots and raspberries I found at Blue Moon Acres Farm Store in Pennington (they have one in Pa., too). I love that place, it sits on a rise so you can see the fields and surrounding countryside, and it’s in a cottage-y structure with a stone walkway leading to the door that is lined with herbs and flowers. Idyllic.

Being in a rush when I made this the next day, I used a purchased crust I had in the freezer, and it was okay, although I know the dough in the Pépin recipe would’ve been better – and sturdier. Since the crust I had wasn’t as big as the one in the original recipe, I skimped on the almond/flour mixture. Big mistake, juice ran all over the tray, but I actually used that runoff to baste the crust with as it came out of the oven. I had thought to follow the directions to baste the crust with strained apricot preserves I’d readied, but that just didn’t work (it wouldn’t melt onto the crust) so I figured, heck, why waste the juicy runoff? That worked just fine. Of course, it was impossible to move this galette onto a serving plate in one piece, as the bottom had gotten soggy, and I was trying to lift it away from the parchment paper I’d put under it. But it almost/mostly worked, and I was surprised it stayed as intact as it did.

One thing I love about apricots is that no one expects you to peel them (right?). But, frankly, I ignore that step with peaches much of the time too, since the usual method is to blanch them first, which is a pain. That’s a deal breaker for me most of the time. But I just ordered a serrated peeler from amazon that I read about, one that’s supposed to peel soft fruits easily, so we’ll see… 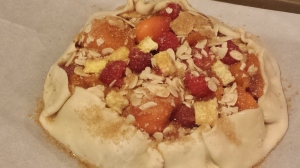 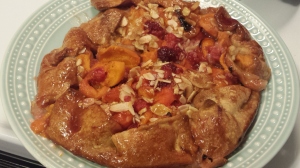 One thought on “Stone Fruit Galette – let the baking begin!”