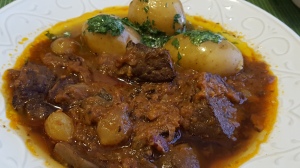 And, no, I didn’t make it myself. As I posted on Facebook last week, I found it at Lucy’s Kitchen & Market and, really, bought it by accident, thinking it was just beef soup. But it turned out to be the real deal, tender cubes of beef in rich red wine sauce with pearl onions and mushrooms. I only later remembered the classic dish also has bacon lardons, which I never thought to look for here. If they were in there, they’d thoroughly “melded.” The dish was saucy enough to serve in a bowl, which I did…for three nights!

Now I want to make it myself, which will probably wait until next winter. But you never know, as it is still too early for many of the foods we associate with spring: Asparagus? Not quite. Rhubarb? Almost. Peas? Those weren’t planted until (traditionally) St. Patrick’s day, so they’re just sprouts so far.  But yes, you can get young spinach and lettuces now, on a more local level than what’s in the market year-round. And foragers are already hard at work in the fields and along the roadside (where unsprayed).

But why not give a last hurrah for cool nights and enjoy some boeuf Bourguignon? You can even serve it with spring peas (not local), as I did one night. Here are some sites to get you started:

The Serious Eats analysis. Short story: use beef chuck, not some fancy cut that lacks the fat and collagen that make for good flavor and texture. They go into everything else in detail too, of course, but I want to be sure it’s understood that you don’t want to make this dish with expensive cuts. It’s a waste. Also, use a dry red, Burgundy, Bordeaux, Chianti, any of those will do. Do NOT use a really expensive wine, however. As long as it’s basically sound, it will be fine, and you can enjoy the pricey stuff “à table.”

Julia Child’s version is thoroughly portrayed on food.com. Lots of steps, but they don’t all have to be done at once. The onions and mushrooms are a separate deal, before combining with the rest of the dish. Have at it, and bon appétit! 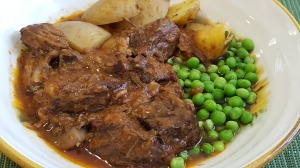 One thought on “April recipe of the month – Boeuf Bourguignon”