I’ll risk censure right upfront by saying I don’t usually favor ramen. I like the flavors and textures, but find it a pain in the neck to consume, at least without spraying broth and bits of stuff all over myself. I’ve tried it every which way, but may just be ramen-impaired, and you’ll notice it doesn’t come with a knife!

But still I persist, and I have to say, I was really impressed with the fantastic ramen – featuring many local ingredients – from chef Frank Caponi, who has worked in some of the better kitchens in our area, most recently at Eno Terra in Kingston.

In recent years, Caponi has also developed a thing for ramen and worked hard, including visiting Japan, to hone his skills, which are at this point considerable. He’s done a few one-night ramen pop-ups as he developed his repertoire, including twice on Monday nights at Nomad Pizza, one last fall and one on the first day of spring a few weeks ago, both of which I was lucky to attend. (See Pat Tanner’s writeup about Caponi here for details about the ramen and news that Nomad will soon be open for pizza on Mondays.)

He uses many local ingredients as possible in his dishes, and the result is a meal that honors both traditional and modern cuisine. His Shibumi Shoyu is transcendent, his Mangalitsa pork tonkotsu rich, and the seafood shio briny. The more you poke and prod and eat the solids, the more bits and pieces enrich and deepen the flavors in his excellent broths. In other words, your meal “evolves” as you consume it, and I find that downright wonderful.

Of course the big question has been where and when would Caponi open his own ramen-esque storefront? Well the word’s out now: he will open ONI RAMEN HOUSE in late spring or early summer…but, alas, not in the Princeton area.

He was approached by Pier Village in Long Branch, and couldn’t resist taking over a spot that was formerly Wild Bamboo. Princeton’s loss is the shore area’s gain, and I’m sure he’ll be a hit in that upscale beachside mixed-use community. Road trip! 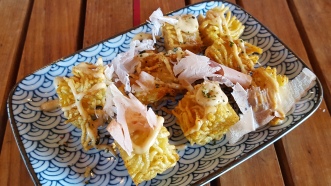 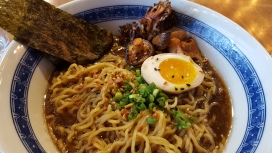 2 thoughts on “Raving About Ramen”