March was cooler than usual, which meant I could still enjoy my favorite wintry dishes. I started the month with the eye round roast pictured below, a recipe I used in my March In The Kitchen column in the Packet (recipe in link). It was a smashing success, and I enjoyed the roast with gravy (helped along by a canned beef gravy and pan drippings), and in a sandwich or two.

I was surprised at how far a 2.85-pound roast went, and ended up freezing a chunk of it. I don’t usually freeze cooked meats, but I took a chance here, and after I thawed it a few weeks later, made an easy BBQ beef out of those leftovers, sauteeing onions, then adding the cubed beef and Sweet Baby Ray’s BBQ sauce. (I couldn’t resist trying that sauce due to good reviews, but it’s nothing special and it has corn syrup, so I won’t buy it again.) I simmered it all for a while until the beef was tender, and voila! Very retro I realize, nothing “modern” about that dish!

I also enjoyed meeting Le Bon Magot‘s owner, Naomi Mobed, for a sampling of her delicious chutneys, preserves, etc. at Bon Appétit, since they carry her products. (She lives in the area.) We had great fun breaking into jars of her Tomato and White Sultana Chutney, White Pumpkin and Almond Murabba, and Brinjal Caponata (more savory than the others). There are also two “marmalatas,” Lemon-Sultana and Spiced Raisin. These are all what you might call “exotically spiced,” with things like cardamom, garam masala, and ras el hanout. Oh heaven!

I cooked some other nice dinners, including the plump chicken breast with potato wedges you see below. I normally only buy chicken thighs because breasts dry out too easily. (And I really dislike boneless breasts for the most part.) But this recipe made me curious, and I will say the results were excellent, event the second breast half which I reheated a few nights later. (This is where you really need a good meat thermometer.) I had asparagus instead of brussels sprouts, and I also had a lone little butternut squash begging to be used – it was from my last CSA delivery in September so had been knocking around my kitchen for months!

I also got into some trouble baking: brownies (coming up in an April Packet column), Irish Soda Bread Muffins, and blueberry crisp. (That tempting chocolate chess pie was from a grocery delivery, thank God it was only one piece.)

There are some other odds and ends in the gallery below (love that fancy yogurt), but do make special note of those pork buns (OMG!) from the ramen pop-up at Nomad Pizza on a recent Monday night. More on that dinner, and future plans for chef Frank Caponi, coming up over the weekend when I have time to post again. 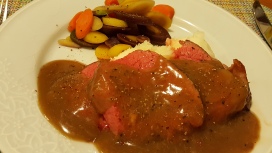 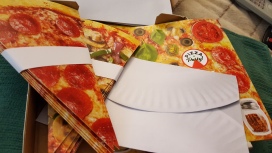 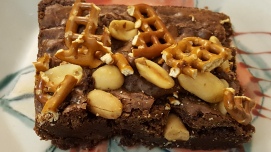 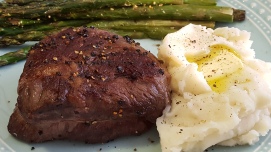