Ahhh, Easter dinner! It seems ages ago, and I guess it was. I took the trouble to make a rack of lamb, potato galette, and fresh peas with pearl onions.The photo of the meal doesn’t show off the galette well at all, so I include a separate photo of that at the front of this post. And although the lamb looks messy on the plate here, it was just delicious, and not as raw as it seems to look! 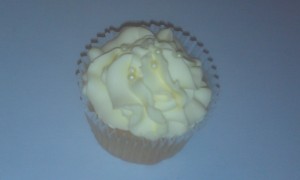 I’d made a trip to the Dessert Boutique for cupcakes, too, and their pretty Lemon Creme cupcake is pictured here, too, with apologies for the poor photo quality.

I also had a yen for chili recently, which is unusual for me. I found a recipe online that includes some of that paste for making mole (which of course I had in the cupboard), and that lended a real depth of flavor to my simple combination of hand-chopped beef (chuck), beef broth, and two kinds of beans, black and kidney. Of course, I used lots of New Mexico and Ancho chili powder, too.

Showered with cilantro and scallions, and a little sour cream, the chili provided many lunches during the week that followed.

Then I found a great recipe on the Food52 website for a kale salad. No cooking of the kale, or massaging it necessary! I used the suggested Lacinato (Italian/black) kale, and just chiffonaded it. Since I’d missed the last of the butternut squash in the market, I opted for sweet potato instead, which I peeled, diced, and roasted. The recipe calls for Cabot Cheddar Cheese, but, honestly, if you wanted to eat vegan, you could leave that out, and maybe just salt the chopped almonds when you roast them. 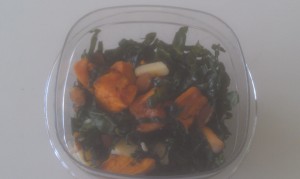 I am toying with the idea of eating Vegan Before 6, as Mark Bittman’s new book describes, and will write about that in an upcoming Princeton Packet In The Kitchen column soon. It’s such a simple concept, and more of a lifestyle decision that a “diet” per se, that it seems like a fairly easy thing to do. That is if I can talk myself out of dairy yogurt every morning, and cheese during the day. (So far I don’t hate soy yogurt, but the two coconut yogurts I’ve tried both reeked of cinnamon.)

And my last bit of sin here is Key lime pie. I keep meaning to make it, and finally thawed some key lime juice I’d had in the freezer for way too long. But it smelled and tasted just right, much to my amazement. (again, poor photos, my smart phone just isn’t as reliable as it used to be, it seems to me.)

I went the completely lazy route here, with a pre-made graham cracker crust and sweetened condensed milk.  I did not want to deal with separating eggs, meringue and all that, so I searched through my recipes and then searched the Internet, and it did seem that one could take a chance on just using 3 whole eggs. It worked out so well, the filling was plenty tart, a firm custardy texture (but not too firm), and not so overly sweet as some I’ve had (I may have cut back on any extra sugar, since that sweetened condensed milk has loads).  A little whipped cream on the side and I could just about hear those palm fronds rustling down in sunny Key West.

Tonight I am roasting a pork shoulder to make Citrus Adobo Pork Pernil, which we recently had at lunch in the Cafe at work. It was just so delicious, I just had to try making it myself. When I googled it, I found Tyler Florence’s version on the Food Network, and a copy-cat version elsewhere that advises marinating the pork for several hours and roasting it over potatoes, which I will do.  I’ll have it with cabbage slaw and whole wheat tortillas (kind of mixing up the Puerto Rican and Mexican thing here), and can’t wait. It has to roast for 3 hours, though, so I’d better get that in the oven soon!