While I’ve long since jumped on the pork belly worshiping bandwagon, I only buy it two or three times a year. And I am hooked on the very simple preparation here, which results in maximum flavor for minimal effort. It’s so rich that a little goes a long way. I buy it at Whole Foods, sometimes it comes in a square-ish piece, as you see below on the roasting pan; other times it’s been cut into more of a long strip. Whatever. 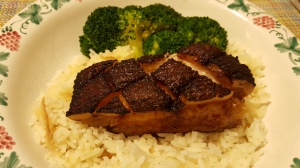 I serve it over rice, any kind I have on hand, although for this I prefer rice that’s not totally plain. It’s just more interesting over, say, fried rice. Kimchi fried rice, if you have it or want to make it, would be great! If I were to serve it over plain rice, my first choice would be sticky rice, as I just know I’d love that textural combo. In this case I had some of FreshDirect’s Sides in a Snap Coconut Rice, so there was virtually no extra work involved other than taking that out of its container and heating it up in my bowl with some leftover broccoli. (Yes, to me this is ideal bowl food, as is so much that I cook these days.)

The juices in the pork will lubricate the rice to some extent. And, even though your roasting pan will have a LOT of fat melted into it by the end (which I don’t keep), the meat is still quite fatty. And you are supposed to eat that along with the meat – no cheating!

Here’s my super-simple way of roasting pork belly. If I want a more involved preparation, I’ll wait until I run across it in a restaurant and order it then. I do love the way that some Asian restaurants serve it sliced into those puffy white flour buns, too, I think that often has a dab of hoisin and some shredded scallion on it, sort of a poor man’s Peking duck. 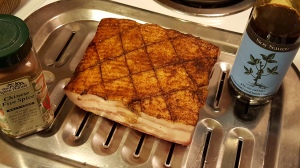 Roasted Pork Belly
Liberally adapted from www.bbcgoodfood.com, where there’s even a video.

You’ll need:
One piece of pork belly 8 ounces to 1 pound, up to you. (I know the BBC says skin-on, but at Whole Foods it’s been skinned and it’s fine. If the skin is on, ask the butcher to score it for you, as it’s surprisingly tough.  If you buy it skinned, be sure there is a thick layer of fat on one side, that’s the side the skin was on.)
5-spice powder
Soy sauce

Score the pork belly using a very sharp knife. Lay the pork, fat-side up, on a rack in a roasting tin. Rub with 5-spice powder and soy sauce, and scatter with salt. This process helps the fat run out and the skin to crisp.

Transfer to oven. Pork belly needs a combination of slow gentle heat to tenderise the meat, plus a shorter blast at a higher heat to crisp up the skin. (But sometimes I find the skin is plenty crisp without that extra heat blast at the end.)

Roast for 2 hours 15 minutes, until a knife tip easily pierces the flesh. If the skin needs crisping, raise heat to 350° for an additional 30 minutes.

Remove pork from the oven, then leave to rest for 10-15 minutes before cutting and serving.